Menu
Home / Innovation and technical files / One day with… MERAND

If you want to know more about MERAND and discover their offer in detail, this article is for you!

I am Ronan Le Bourhis, founder of Hopi Consulting. I have created these articles with the wish to promote the suppliers with whom I like to share projects, while always keeping in mind my will of independence and impartiality.

First of all, thanks to Yannick GERARD and Oksana LOGVYNENKO for their help in writing this article.

The MERAND Mécapâte company was founded in 1925. It was at that time known under the name of Guibert and manufactured ovens for bakeries. In 1954, the company brought out its first model of horizontal baguette moulders. In the 1960s, the company completed its range by manufacturing hydraulic dividers and other models of moulders. In 1970, the company was bought by Alex MERAND, and specialised in the mechanisation of doughs by developing proofers and automatic production lines. 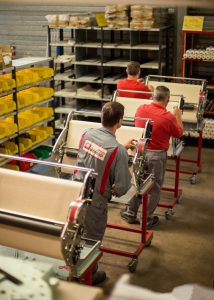 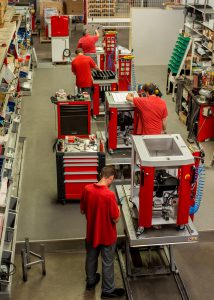 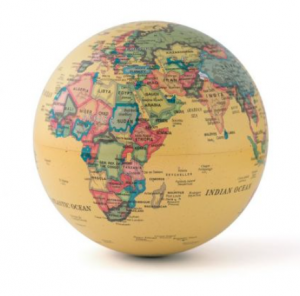 Today, MERAND has a turnover of 5 M€, of which more than 65% is achieved through exports. In a few figures, MERAND manufactures and markets about ten complete lines per year, about 400 dividers and 200 moulders.

The head office is based in Rennes in Brittany and the company has a staff of 30. 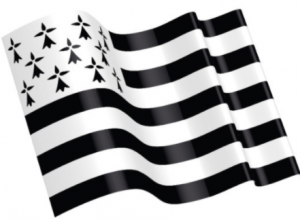 The sales force covers the whole French territory and for export, the distribution of the equipment is done through a network of resellers in charge of the sale, the installation and the after-sales service of the machines.

And I will add as an introduction that I am delighted to highlight an equipment manufacturer that caters for a type of customers with a smaller industrial dimension than the large national or international players. Many of them are going through stages of technical investment that lead them to greater automation, productivity and production capacity, and I always find it exciting to accompany them in these strategic moments. 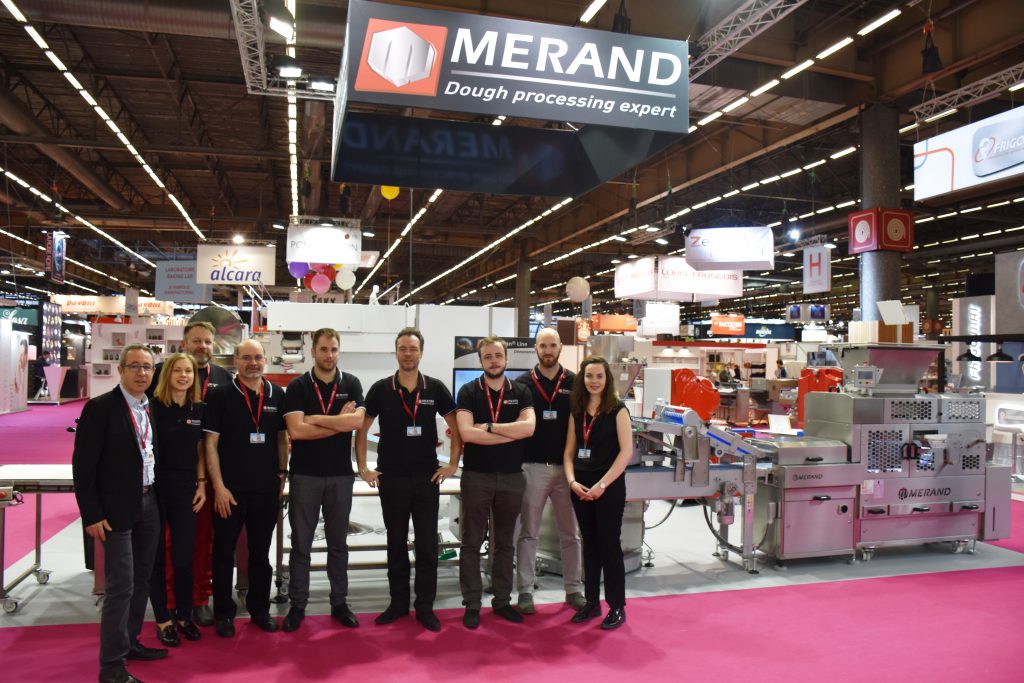 MERAND designs, manufactures and markets dough mechanisation equipment for bakers whose activity ranges from the artisan to the semi-industrial stage.

The range of equipment offered by MERAND for the dividing stage is made up of various machines and technologies. 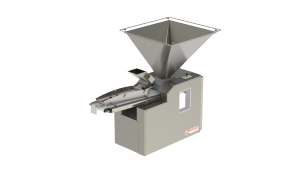 A first solution proposed is the piston technology divider. The dough from the kneading machine is transferred to a hopper above the divider. The dough is drawn by gravity to the bottom of this hopper into one or more piston chambers which continuously fill, empty, fill, empty a volume of dough previously calibrated by the stroke of the pistons. The dough pieces are thus pushed out of their chamber at the right weight, as you will have understood, this weight being based on the principle of a portion defined by a volume. Hence the name volumetric divider. An all-purpose machine, it nevertheless reaches its limits when the dough is very moist and sticky. 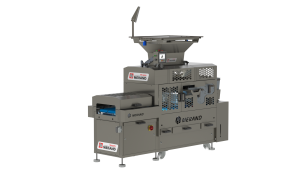 The second dividing technology offered is weight dividing. This machine is particularly well adapted for hydrated and sticky doughs. Its presentation is made at the end of the article in connection with the technical innovations offered by MERAND. 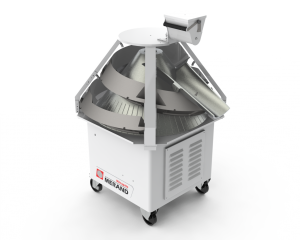 MERAND manufactures and offers conical rounding machines, which consist of rotating the dough pieces between a cone and channels. There are conical rounders with fixed channels and others with adjustable channels in order to adapt to a very wide range of dough piece weights. 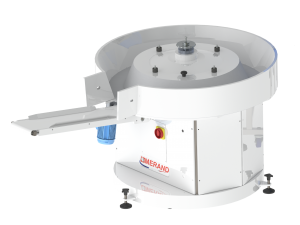 range of rounders. The way the dough is rounded is very close to the way it is done maualy by the baker. That’s why this range of machine is dedicated to premium products. 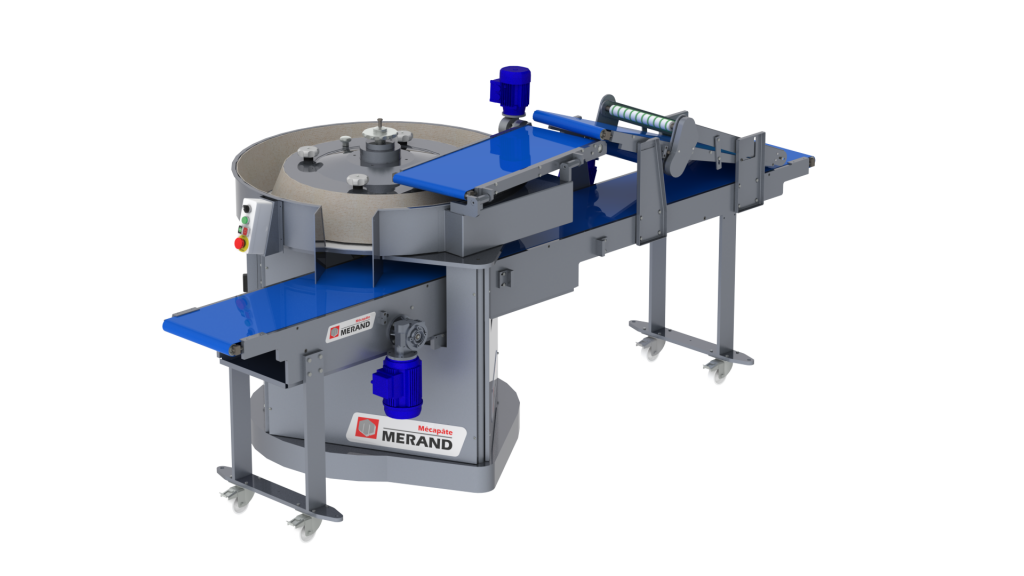 Rest in proofers in swing trays 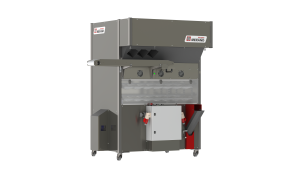 MERAND offers a range of proofers to allow the dough to rest between dividing and moulding stages. This resting stage allows to reduce the tensions in the dough and thus to optimize its aptitude to be mechanically moulded or laminated afterwards. The resting time is variable. It depends on the products to be baked, the nature of the dough, the type of production (fresh/frozen, etc.), the ambient temperature, the shape of the dough pieces after division, etc. 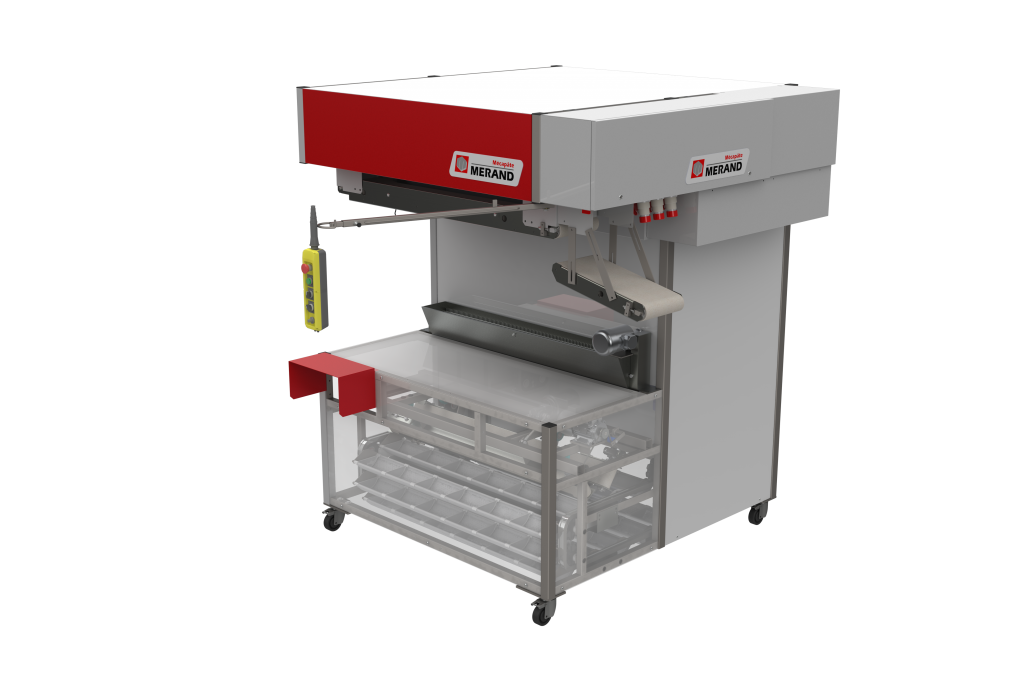 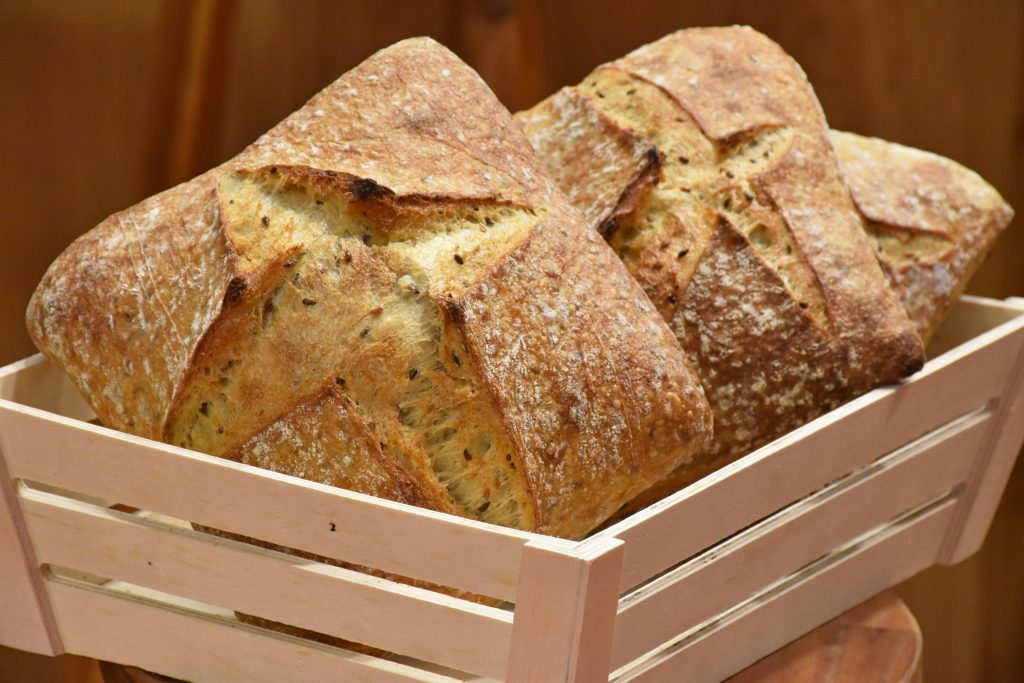 MERAND also offers a range of machines dedicated to the moulding stage. Three distinct stages associated with the dedicated machines are offered: Firstly, the pre-lamination to obtain a “galette”. Secondly, the formation of the scroll (the rolling of the galette) using a heavy belt or a mesh. Finally, the final lengthening to obtain the desired length and appearance of the baguette or bread. 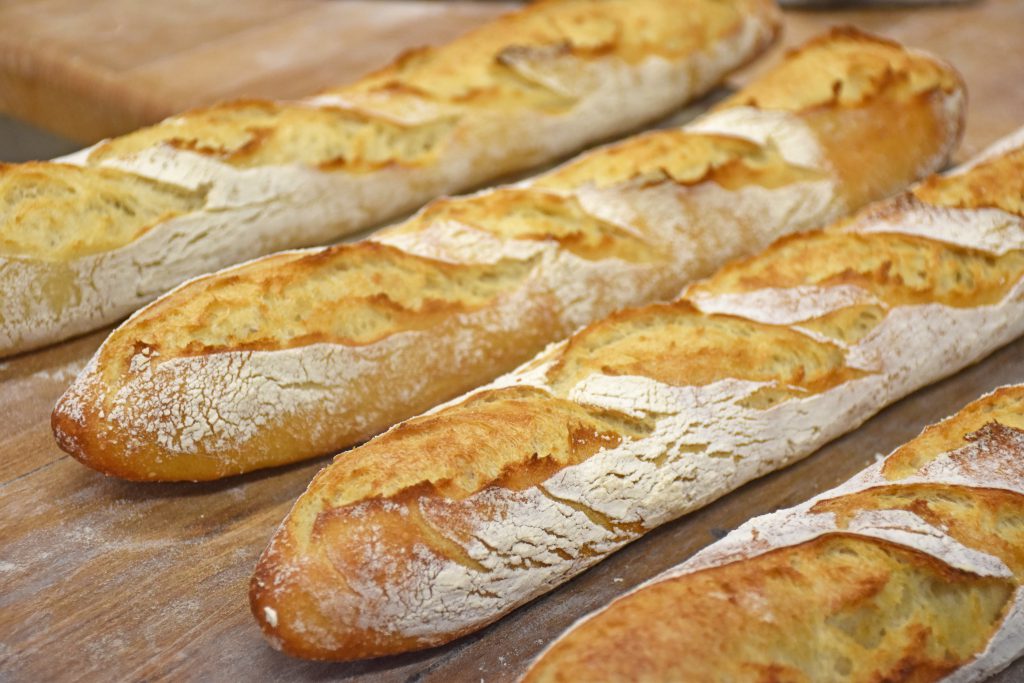 MERAND offers different configurations and technologies of integrated equipment to make continuous manufacturing lines. The objective is to achieve higher levels of production capacity than a discontinuous and semi-manual mode of operation while keeping a guaranteed quality of final products. 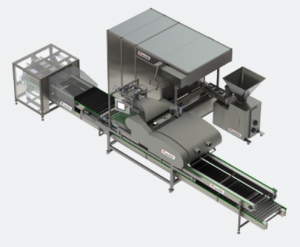 The FlexiLine automatic line can produce up to 2,500 baguettes or 6,000 rolls per hour. It has a particularly efficient dough pieces centering system, the Top-Centering. This system measures the length of the pre-rolled dough pieces as they leave the proofer and places the center of the dough piece in the middle of the feed belt into the moulder. The automation continues right through to the threading stage. 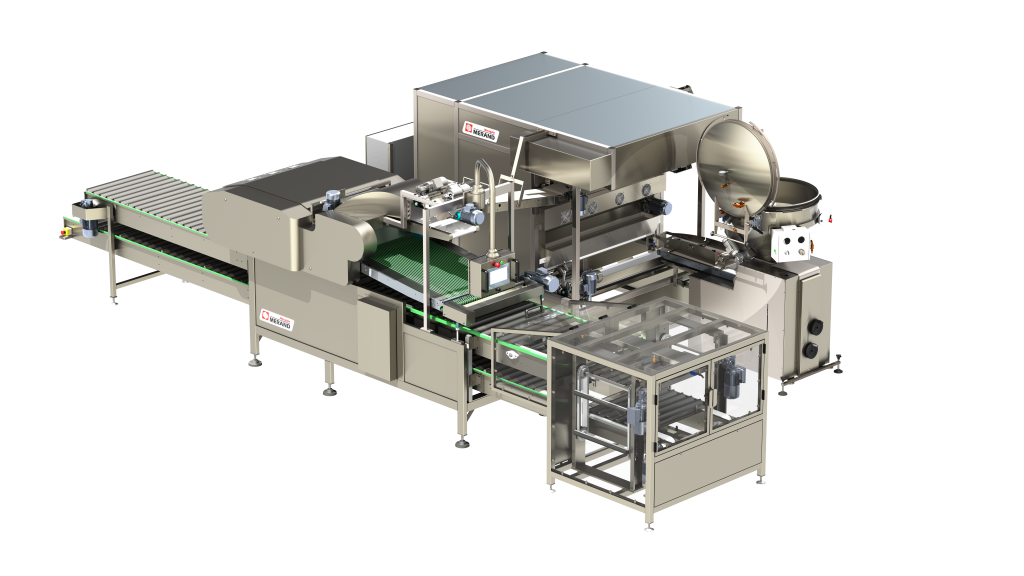 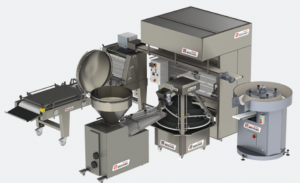 The KraftLine automatic line is dedicated to moulded products and half loaves. Production rates range from 1,500 products to 2,500 products per hour. 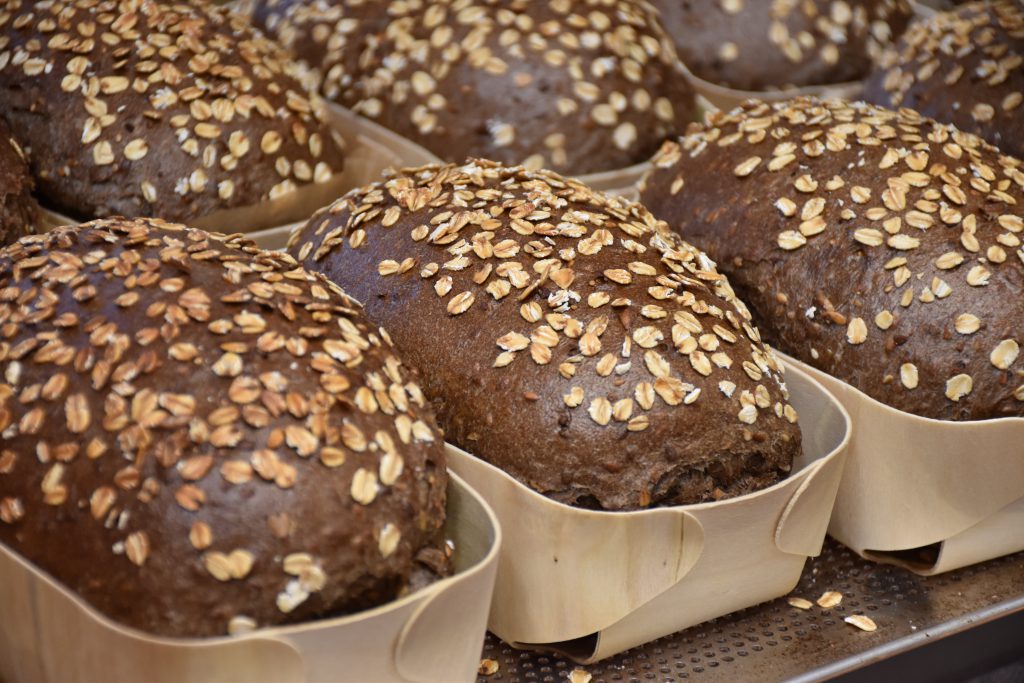 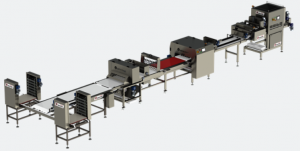 The AquaPan automatic line is suitable for highly hydrated doughs and recipes such as ciabatta bread. The dough division and moulding stages are suitable for sticky doughs requiring little mechanical work. Seed depositing steps can be added as well as a final phase of depositing on peel boards. A continuous technology which lends itself to outputs of 1500 to 3500 baguettes per hour. 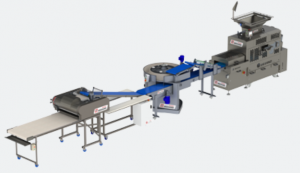 The RheoPan line is the most all-purpose continuous production line offered by MERAND: it allows the production of a very wide variety of products with different types of doughs without any stress and with a very good precision in the weights. Without compromising on capacity as production rates can reach up to 2500 baguettes per hour.

Scoring consists of doing blade strokes on the dough pieces at the end of the fermentation process. These are what will make the “ridge” and therefore the visual appearance of the breads when they come out of the oven. 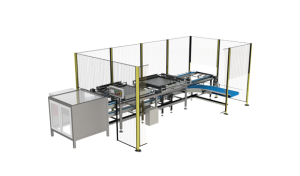 repetitive gestures of blade strokes but with manual introduction and evacuation of the nets. There is also a fully automated range, which no longer feeds the installation net by net but by whole trolley. The machine unstacks each net, performs scoring and then reloads a trolley with laminated, ready-to-bake dough pieces. 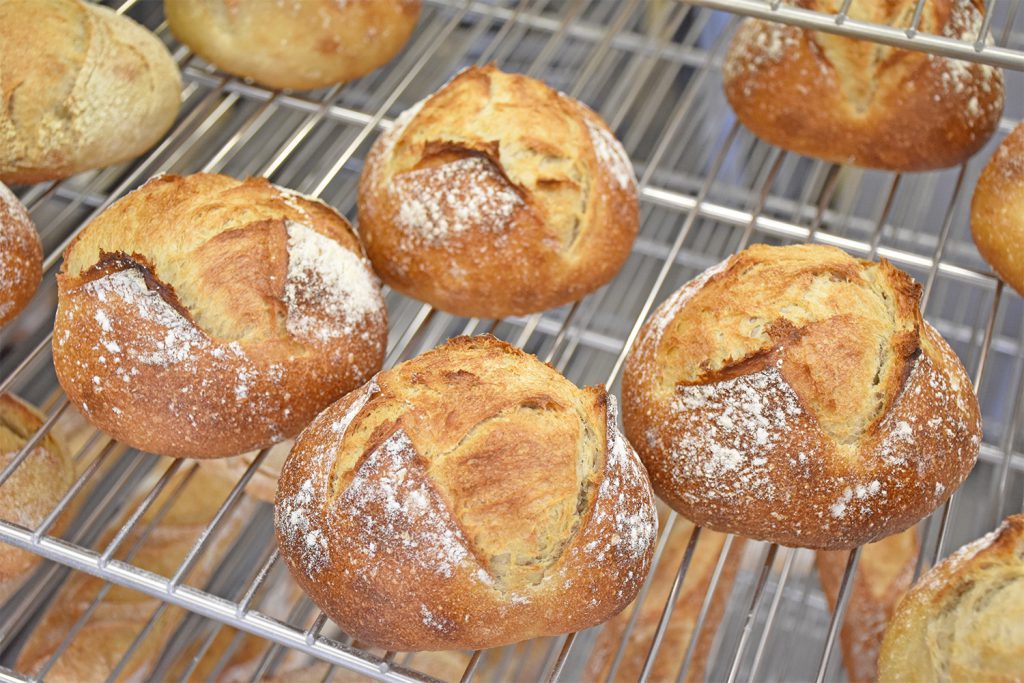 MERAND has developed a dividing machine that is particularly well suited for hydrated doughs, which require a “stress-free” process, i.e. with little work and mechanical effort.

The operating principle of this type of automatic dividers is to make the dough go down by gravity from the top of the hopper to the belts on which there is a very precise weight control system. Depending on the weight of the dough pieces required, a guillotine cuts the strip of dough and the dough pieces come out at the right weight. The dough is worked very little by the machine to not damage its honeycomb structure. A system of oscillating rollers gradually lowers the height of the dough strip. The weight control system continuously readjusts the parameters to remain within the desired weight tolerance. This technology is therefore suitable for soft and highly hydrated doughs that require stress-free mechanisation.

MERAND is a French and Breton company specialised in the supply of dough mechanisation equipment. Its range of machines is wide enough to meet the needs of artisan bakers who wish to equip their bakery or to group their production under one large central manufacturing unit, or of industrialists who wish to build a project with a production capacity of around 1000 to 2500 pieces per hour.

I am very pleased to put the spotlight on MERAND because there are too few opportunities to mention French companies, and moreover Breton ones!  which design, manufacture and sell equipment for the semi-industrial bakery sector.

I accompany more and more clients in the bakery sector who decide to “take the plunge” by investing in larger and more efficient production tools. It is always exciting to secure these technical challenges, to work to guarantee the same product quality as their old traditional methods, to think about new work organisations and very often to design the construction of a new production unit.